One of the best places for lunch in Gainesville! Delicious sandwiches and burgers. Healthy options as well
Review for Mother's Pub & Grill by Nicholas
Rating:

One of the best sports bars in Gainesville! Mother's caters to all but is great for drinking beer and watching sports
Review for Munegin's On 13th by Nicholas
Rating:

Great tacos at reasonable prices! I got the 3 taco deal and they let me choose 3 different tacos. The corn shells were very sturdy yet soft, meats were juicy ..
Pros: great food and service
Cons: very small space 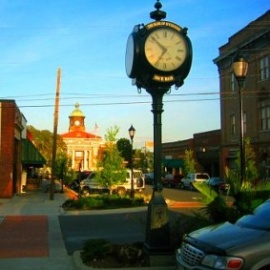 Hotels & Things to Do in Inverness View All

Nightlife in Inverness View All

Restaurants in Inverness View All

Shopping in Inverness View All

Its slogan is "Small Town Done Right". Inverness is a small town an hour and a half West of Orlando, North of Tampa and South of Gainesville. We have a newly renovated theater...The Valerie. Mrs. Pearl G. Maddox built the theatre in 1926-27 during the silent movie era, naming it The Valerie after her daughter. The first movie shown was "The Only Woman" in 1927, the last was "The Untouchables" in 1987. Herbert Pittman of Clearwater leased the theatre when "talking equipment" was installed. Prices were 10 cents for children and 25 cents for adults. At a time when other towns prohibited Sunday shows, City Council boldly adopted a resolution to permit Sunday movies, boosting trade in the City and making the Theatre a social focal point for many years. The theatre was gutted by fire in 1939 and rebuilt. In 1962, daily clips from the movie "Follow That Dream" were viewed with Elvis in attendance. The building remained vacant from 1987 until the City purchased it in 2009. With community involvement and detailed planning, a grand reopening was held for The Valerie Theatre Cultural Center in June 2015.

We have the Trailhead for the Withlacoochee State Trail, which is a 46-mile multi-use trail for walking, biking, and in-line skating. It's ranked within the top ten multi-use trails in the country.

If you live in Gainesville and are also a sugar maniac, you probably have seen some of these places already. But if some of you don't eat like a child and actually

Top Spots for Trivia in Inverness!

If you enjoy testing your knowledge with friends and family, look no further! Inverness has a variety of options every week that will keep your synapses firing.  Her

Independence Day is just around the corner, and nothing quite says Fourth of July like fireworks. See the biggest and brightest with our list of the best fireworks shows in

Romantic Things to Do During the Holidays in North Central Florida

With cooler weather and Christmas near, the holiday season lends itself to uniquely romantic date ideas. Fortunately, you donât have to travel out of state or go to a big city to experience the holiday...

They say that brunch is breakfast without an alarm clock and a Sunday treat to the late-risers! The best part of brunch is a more relaxed atmosphere and the acceptance of mimosas in the morning! ...

The Good, the Delicious, and the Scrumptious Desserts in North Central Florida

Is your sweet-tooth panging for a bite of a sugary treat? In North Central Florida, delicious treats seem to line the streets from neighborhood to neighborhood. When you or your taste buds are looking...

Letâs switch up the couch surfing for the New Year! If you're in the local Inverness or Citrus area Iâm going to give you 4 reasons to change your habits and visit Downtown Inverness this Friday!