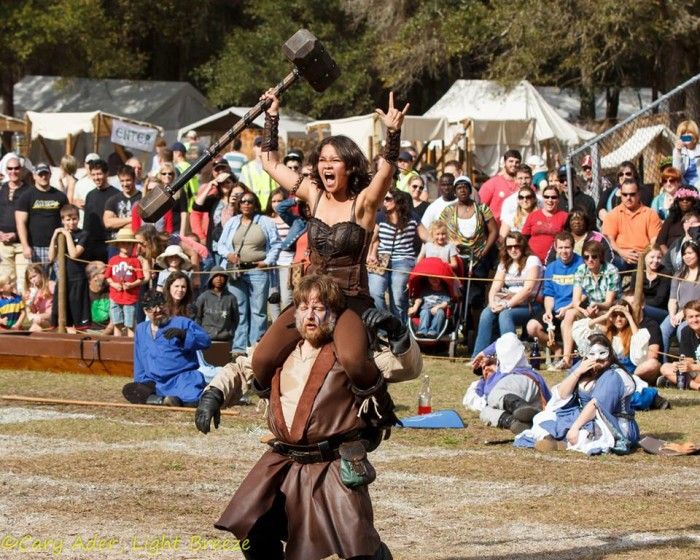 Nothing's better than a long weekend! January 20th is celebrated annually for Martin Luther King Jr.'s birthday. Here are some of the Best Things To Do in Gainesville and Ocala This Weekend.

The time of year for the Hoggetown Medieval Faire is nigh. Adorn your medieval garments, throw some flowers in your hair and grab your drinking goblet. The Hoggetowne Medieval Faire will be at the Alachua County Fairgrounds starting January 18th and will go until February 2nd. Admission ranges from $8 to $18 per person.

With football season now coming to a close, continue to cheer on the Gators this weekend at the Gators basketball game! The Florida Gators will be playing the Auburn Tigers at the Stephen C. O'Connell Center on Saturday, January 18th at 1:30p.m. Tickets are still available online for $35 per person. The Florida Gators are currently ranked 3rd in the SEC and the Tigers are ranked number one!

If you're looking to laugh uncontrollably, look no further. The Gainesville Comedy Con is being held at the HIGH DIVE on Saturday, January 18th starting at 6p.m. Visitors will get a sampling of some of Gainesville's best comedy, improv and sketch routines! Tickets are available still and range between $8 and $10 per person.

The Book Of Mormon

New York Times has called the Book of Mormon "the play of the century!" With it being a brand new decade, take in this spectacular showing! The Book of Mormon will be performed at the Curtis M. Phillips Center for the Performing Arts in Gainesville. Tickets are still available and range in price from $49 to $109 per person. The show will be held on Friday, January 17th from 7:30p.m. - 9:30p.m.

Celebrate and honor Martin Luther King Jr.'s legacy on Monday, January 20th. The MLK Day of Service will be held at the Reitz Union on the University of Florida Campus from 8:30a.m. - 2p.m. According to the University of Florida's website, "students will be able to reflect on the importance of service and its’ connection with diversity and inclusion while giving back to the Gainesville community at the same time." Furthermore, this event is completely free!

Make sure to bundle up as temperatures begin to drop for winter especially since a few of these events are outdoors!

Where to Trick or Treat: Best Events in North Central Florida

Things To Do in Gainesville This Weekend | February 6th - 9th

Things To Do in Gainesville This Weekend | January 30th - February 2nd

Things To Do in Gainesville This Weekend | January 23rd - 26th